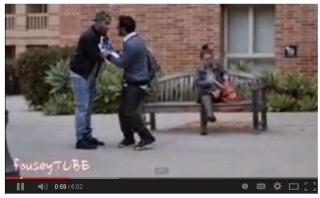 Excerpt: As she watched a man getting shoved to the ground, Caitlin Estudillo sprang from a bench near Powell Library and tried to stop what she perceived as a bullying incident unfolding in front of her. For the third-year sociology and world arts and cultures/dance student, the act was instinctual. “I didn’t give it a thought; it was just something I had to do,” Estudillo said. “I didn’t think of the consequences.” At the time, Estudillo did not know that the conflict was a staged fight designed to gauge how people would react to seeing someone else be bullied. Various simulated bullying incidents were filmed around the UCLA campus…

Note: Some older readers may recall the real-life Kitty Genovese story in New York which had elements of the experiment above but turns out in retrospect to be not what it seemed at the time:
http://learning.blogs.nytimes.com/2012/03/13/march-13-1964-new-york-woman-killed-while-witnesses-do-nothing/

Video of the UCLA experiment at: