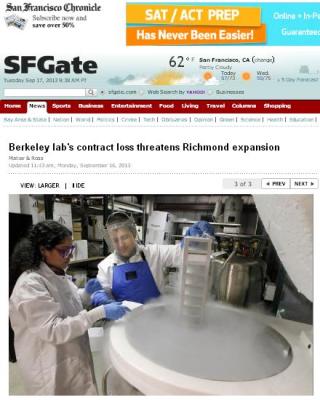 On Thursday, the Regents meeting seems to consist of a PR tour of the Lawrence Livermore National Lab as part of a more general review of the different Dept. of Energy labs that continues from the last meeting [http://regents.universityofcalifornia.edu/regmeet/jul13/o1.pdf]. As the screenshot above suggests, however, the timing is not so good for discussing the labs, at least for cousin lab, Lawrence Berkeley. [Three labs are managed by UC as descendants of the World War II Manhattan Project.]  From the website yesterday of the San Francisco Chronicle: After years of planning, the Lawrence Berkeley National Laboratory has just lost out on a highly coveted, $1.5 billion contract to build the world’s most sophisticated super X-ray microscope – and that could spell trouble for the lab’s planned expansion to a second campus in Richmond… The University of California-managed lab was so confident of winning the laser contract from the feds that it set aside a large chunk of its 200-acre campus in the Berkeley hills to accommodate it. But then a July 25 report by a federal Department of Energy scientific advisory committee concluded that the Berkeley lab did not meet the criteria needed for building the new laser…
Full story at http://www.sfgate.com/bayarea/matier-ross/article/Berkeley-lab-s-contract-loss-threatens-Richmond-4816913.php#photo-2153088
PS: Stanford may get the contract.