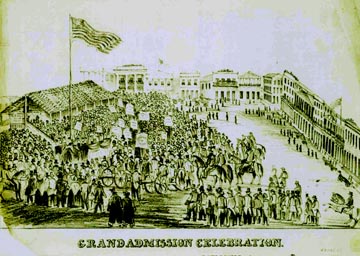 …today is Admission Day.  No, it doesn’t refer to getting into UCLA.  See below:

In February of 1848, Mexico and the United States signed a treaty which ended the Mexican War and yielded a vast portion of the Southwest, including present day California, to the United States. Several days earlier, January 24, 1848, gold had been discovered on the American River near Sacramento, and the ensuing gold rush hastened California’s admittance to the Union.  With the Gold Rush came a huge increase in population and a pressing need for civil government.  In 1849, Californians sought statehood and, after heated debate in the U.S. Congress arising out of the slavery issue, California entered the Union as a free, nonslavery state by the Compromise of 1850.  California became the 31st state on September 9, 1850…

And the appropriate song: