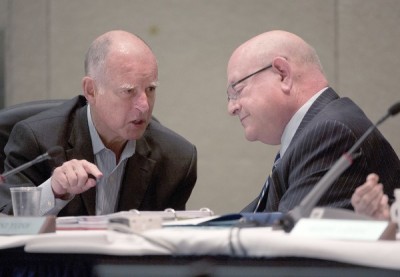 Yesterday, we ran this photo from a recent Regents meeting with a kind of multiple-choice test for incoming UC President Napolitano on what song was (now former) President Yudof likely NOT thinking of in the scene shown above.  But it has been suggested that he might not have been thinking about songs at all.  It might have been movie scenes.  So we will repeat the basic question modified to be “What movie scene below was President Yudof most likely NOT thinking about?”

Selection A
Selection B
Or maybe he could have been thinking about some more recent films by an earlier governor:
Selection C
Selection D