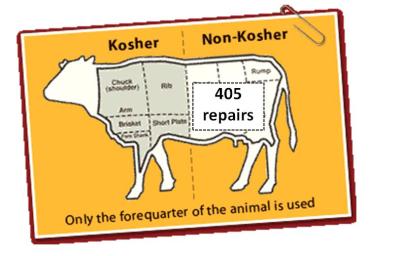 From the Jewish Journal comes a report that the 405 construction near UCLA is decidedly Non-Kosher.  But you probably knew that.
The Los Angeles Community Eruv will not be in operation during the Shabbat that begins at sundown tonight, June 14, due to construction on the 405 Freeway. An eruv makes carrying items within its boundaries on Shabbat permissible for Jews, according to halacha (Jewish law). This includes synagogue-goers carrying books and prayer shawls to parents wheeling strollers.
According to Howard Witkin, the head organizer of the Los Angeles Community Eruv… , construction at the 405 on- and off-ramps at Wilshire Boulevard will make it impossible to replace the 150 to 200 feet of fencing that needs to be standing in order to make the eruv kosher. “There’s just too much going on there to make it possible for us to do repairs,” Witkin said, adding that this is only the second time in three years that this has happened due to construction.
“We hope to have a workaround for next week, but the next three weeks will be problematic as the contractor rushes to finish new and demolish old bridges at Wilshire,” he wrote separately in an e-mail to a community notification list…
Full story at http://www.jewishjournal.com/los_angeles/article/405_construction_downs_eruv

UPDATE: The 405 Southbound near UCLA will be closed tonight:
http://brentwood.patch.com/groups/politics-and-elections/p/405-freeway-southbound-to-close-tuesday-night