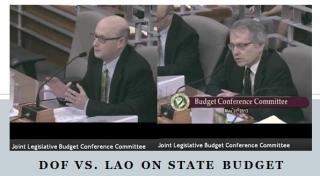 From the UC perspective, there is no significant direct effect on the operating budget regardless of which budget is enacted.  However, the assembly version provides for additional scholarship and Cal Grants funding so students have an interest in the final outcome.  The hearing was not exactly a clash of the titans but you can hear testimony I extracted by the Chief Deputy Director of DOF and the Legislative Analyst (excerpt) explaining their differences at the link below.

A key point is that due to Prop 98 – which earmarks funding for K-14 by formula – extra revenue (such as seen by LAO) tends to be sopped up by that sector.  The governor’s position is that the state should be cautious since revenue projections depend heavily on capital gains tax receipts which in turn reflect the volatility of financial markets.  Maybe the extra revenue that seemed to appear recently will prove to be a temporary blip, etc.  The Legislative Analyst acknowledges that concern but he notes that the risk that the extra revenue will evaporate is largely dealt with in the two legislative proposals by making K-14 spending partly contingent on the actual arrival of the funding and by putting some of the money into the reserve.  It might be noted that if there were an outright economic downturn, none of the proposals would avert a return to a budget crisis.

The governor has a line-item veto and so could trim spending if the legislature enacts a budget he considers excessive.  He could also veto the entire budget and throw the issue back to the legislature.  In theory, the Democrats in the legislature could override such actions using their two-thirds supermajority.  Whether all Dems would go along in that situation is uncertain.  Minority Republicans now support the governor’s cautious approach.  The legislature must enact a budget by June 15 or forfeit pay for each day thereafter that they haven’t done so.  However, it is essentially up to the legislature to determine what defines an enacted budget.  So there will surely be something by June 15 although there may be loose ends to tie up beyond that date.

You can hear the DOF and LAO testimony below:

The LAO prepared a summary of the three budget proposals for the hearing available at:
http://lao.ca.gov/handouts/Conf_Comm/2013/Conference-Overview-53113.pdf