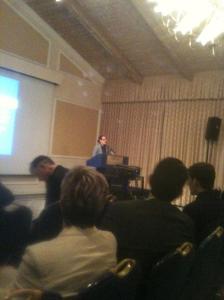 This evening (11-14-11), a public hearing was held on the scoping report on the proposed hotel/conference center – primarily an environmental review. See earlier posts on this blog. Most speakers were representatives of neighborhood groups and representatives of local hotels. One retired and recalled faculty member spoke. Major themes were the lack of a business plan, incompleteness of architecture and design features, parking, and traffic issues. The UCLA architect repeatedly stressed that the various designs shown on PowerPoint slides were conceptual, not final. Some of those who made comments noted that it was difficult to evaluate a project without final design plans or a business plan. Hotel owners pointed to exemption from local taxes as unfair competition. They supported a conference center but not a hotel and expressed doubt that the project as described could break even. They were dubious about the notion that the project would generate business for them rather than reduce it.
Some speakers noted that they were pleased that UCLA found a new location that did not involve demolishing the Faculty Center. However, there were concerns about parking issues, traffic issues, and exactly how the hotel traffic could be made to integrate and accommodate the municipal bus station which is right across from the proposed project.
The hearing lasted just under an hour. You can hear the audio of the event using the option below:

Alternative links to the audio in three parts are at:
Part 1

UPDATE: The Daily Bruin’s report on the meeting is at http://www.dailybruin.com/index.php/article/2011/11/plans_for_new_ucla_hotel_and_conference_center_get_negative_responses_from_community#comments